Idiopathic dilated cardiomyopathy is defined as "a syndrome that has no obvious cause such as hypertension or coronary artery disease having a lesion in the myocardium, and is characterized by 1) diffuse contractility of the left ventricle, and 2) left ventricular enlargement (the guideline of the Japanese Circulation Society). The disease is associated with cardiomyocyte depletion and highly compensatory cardiomyocyte hypertrophy and nuclear degeneration (nuclear swelling, nuclear irregularities, and deep chromatin staining, etc.). It also indicates a decrease in myofibrils (porosity) and vacuolar degeneration. It is often progressive, characterized by heart failure symptoms, and has a poor prognosis with repeated acute exacerbations. It may also cause sudden death due to lethal arrhythmia and thromboembolism of the artery (Fig. 1).

In the early stages of heart failure, drug usage is applied, and observe the effect while using multiple drugs in combination or changing to another drug. However, at present, widely applicable alternative or complementary treatments other than drug treatment does not exist. In dilated cardiomyopathy, cardiac dilation progresses even if drug therapy is continued, and the symptoms of heart failure generally worsen gradually. Heart transplantation is the only effective treatment when heart failure progresses from a state of NYHA-III, where physical activity is highly restricted, to NYHA-IV, which does not eliminate the symptoms of heart failure even if the patient continues to rest. However, in Japan today, the average waiting time for heart transplantation exceeds 1200 days. Most people will have to wait for a heart transplant with a ventricular assist device equipped. The cardiac support net developed by iCorNet Laboratory was developed as an effective treatment method during the period when there is no alternative treatment method, and can be a treatment method that prevents the exacerbation of heart failure associated with cardiac dilation.

The following is an explanation of heart failure (symptoms) associated with a decrease in the contractile force of the heart. Heart failure is a condition in which the pump function (heart function) that pumps blood throughout the heart cannot function sufficiently. Palpitations and dyspnea are the major subjective symptoms. At first, it is felt during exercise, but as the symptoms progress, it also occurs at rest, and causing dyspnea at night. In addition, as cardiac function declines, edema and arrhythmia occur. In such a state, the living body deflates blood vessels as a compensatory mechanism, activates the sympathetic nervous system that increases the contractile force of the heart, and increases cardiac output. However, this sympathetic nerve activation causes damage to the heart muscle in a chronic heart failure state, resulting in further deterioration of cardiac function.

When blood flow to the kidneys decreases, the kidneys produce a substance called renin, and the renin-angiotensin-aldosterone system works to reduce urine output and raise blood pressure. Originally, it is a system that works to maintain circulating blood volume and maintain the required cardiac output, but if heart failure continues, it will put a burden on the heart (cardiomyocytes), and as a result, cardiac function may deteriorate. To compensate for the decreased cardiac function, the heart changes to an enlarged state with more contractile force, and contracts and relaxes repeatedly. This is a natural compensatory mechanism for heart failure. However, if it continues, the heart will expand further, causing additional stress and damage to the heart muscle. The enlarged heart becomes even weaker in contractile force and cannot function effectively. To make up for this, the heart works harder and harder, leading to further expansion and eventually a cycle of deterioration. The patient's heart gradually expands and spheroidizes (= heart remodeling). (Fig. 2) 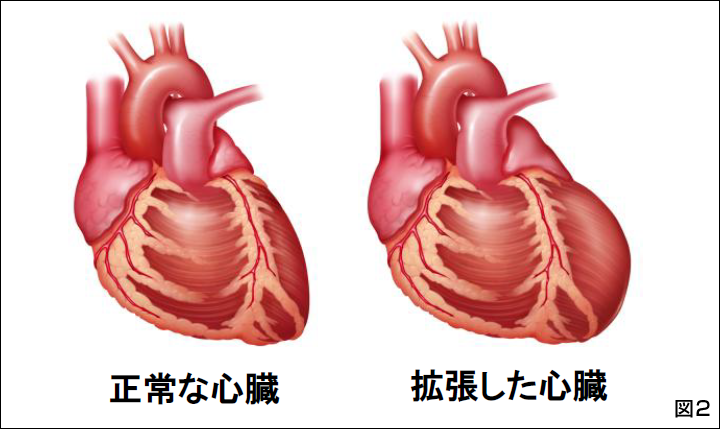 The first treatment for heart failure is drug treatment. If indicates edema, diuretics are given. Drugs that suppress the renin-angiotensin-aldosterone system, such as β-blockers, angiotensin converting enzyme inhibitors (ACE-I), angiotensin receptor blockers (ARB), and aldosterone inhibitors, are administered, and they have a certain effect. However, it is difficult to stop the progression of the disease itself, and the effect of cardiac remodeling is limited.

Patients with ventricular conduction disorders and ventricular desynchrony are treated with a biventricular pacemaker to improve cardiac resynchronization therapy. However, according to reports, about 30% of patients (non-responders) have poor therapeutic effects. A method called partial left ventricular resection (Batista surgery) was also attempted to improve the contractility of the heart by removing a part of the enlarged heart to shrink the ventricle. However, this is contraindicated (Class III) in the guidelines of the American College of Cardiology in 2009, and there are few facilities to implement it, as many patients suffer from cardiac enlargement again and heart failure worsens.

Other surgical treatments for heart failure include mitral valve repair and replacement if there is mitral regurgitation. When heart failure worsens and fall to NYHA-IV end-stage heart failure, heart transplantation and ventricular assist device treatment are performed. However, due to a shortage of donors, heart transplants are performed in only around 30 cases (in Japan) a year, and the waiting period for transplants exceeds 2 years, and the number of patients who can be indicated is extremely limited. Although the survival rate of implantable ventricular assist devices has improved significantly in recent years, however, the incidence of complications such as thromboembolism such as cerebral infarction, bleeding associated with anticoagulant treatment, and driveline infection is still high. And, in Japan, insurance coverage is only available for patients who are eligible for heart transplantation. Accordingly, its adaptation is also severely limited. Therefore, there was an urgent need to avoid or delay their alternative treatments or treatments as much as possible.

Regardless of the causative disease, heart failure worsens due to progressive cardiac enlargement (= cardiac remodeling). Cardiac Support Device Therapy, which attempts to physically prevent this cardiac remodeling with a mesh cloth or shape-memory alloy, has been attempted in Europe and the United States since/around 2000. A product named “Acorn CorCap” was approved for medical devices in Europe and was used to treat heart failure. A clinical trial of this device was also conducted in the United States, which was effective in preventing cardiac remodeling and improving clinical symptoms such as quality of life but did not show a significant difference in survival rate. Therefore, the business was suspended without the approval of the US Food and Drug Administration (FDA). Other cardiac-support therapies (Coapsys) also significantly improved survival in clinical trials but were not put into practical use.

We found that the common characteristics of these products were: 1. Not optimally designed for each patient, 2. Mechanisms to avoid deterioration of right ventricular diastolic function, were not included in the basic design. Accordingly, we have developed a new design and mechanism that improves these two points.